Showing posts from March, 2013
Show all

March 08, 2013
This is probably my first post that's not about a new manga chapter I translated. Sorry for getting your hopes up. I just wanted to announce that I started working on the original Molester Man 2ch threads. You can see the translated bits when you click on the "Molester Man 2ch threads" button on the top of my blog. As I hinted at in my last post, I'll be translating it post by post. What I meant is that I'll have the online page with my translations synchronized with the files on my computer. It's supposed to feel like an actual thread. New posts come in one by one as I'm translating it. That way, I don't have to wait until I've translated a whole thread or a whole batch of posts which makes things a lot more comfortable for me. Even if I'm extremely busy, I'll still find the time to translate a post or two. So check in every once in a while and see if there are any new posts in the threads. Have fun! The threads had to be moved to Fire
62 comments
Read more 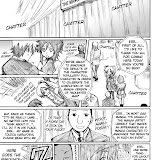 More than 3 months after chapter 21, I have finally gotten around to finishing chapter 21.5, the bonus epilogue chapter that's a YOKO-original, meaning that it's not based on the original Molester Man threads. With this, the Molester Man manga, the first manga I ever attempted to translate, is finally finished. I spent years translating this manga and I still can't really believe it's done now. But this is only the manga version of "Molester Man". The original threads are fascinating and very entertaining in their own way. They're almost like a historical document from that time in November, 2004 when 2ch had gotten more popular than ever thanks to Densha Otoko etc. and VIP had gotten extremely big and chaotic. It'd be an interesting project for me. I know it's a lot of work, but as I'd translate post by post I'd be able to work on it even if I'm very busy with other things. But well, I haven't even started yet, so don't expect
33 comments
Read more
More posts