Showing posts from 2019
Show all

Hey, everyone. So this one is an especially interesting one. I stumbled on this while looking for interesting Magic: The Gathering manga. I'm only a casual MTG player, but I always wondered if there are good manga about MTG. (Yes, I know about the Yokota Takuma manga that is running right now.) There were countless interesting amateur manga of varying quality about MTG on pixiv, but there was one every 2ch thread kept mentioning. It was a manga called "Starlight Manaburn" which used to be readable on the homepage of Hobby Japan Co. Ltd., the official Japanese seller of MTG until 2009, so nowadays it's pretty much impossible to find. After an extensive search in the depths of the Japanese side of the Internet, I did find one working link to a zip archive containing the latter half of "Starlight Manaburn" (chapters 15 to 38) and the shorter manga "Starlight Wizards" which is basically the prequel of "Starlight Manaburn". You'll need a c
9 comments
Read more 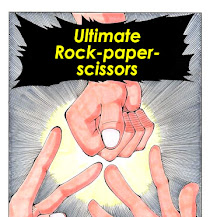